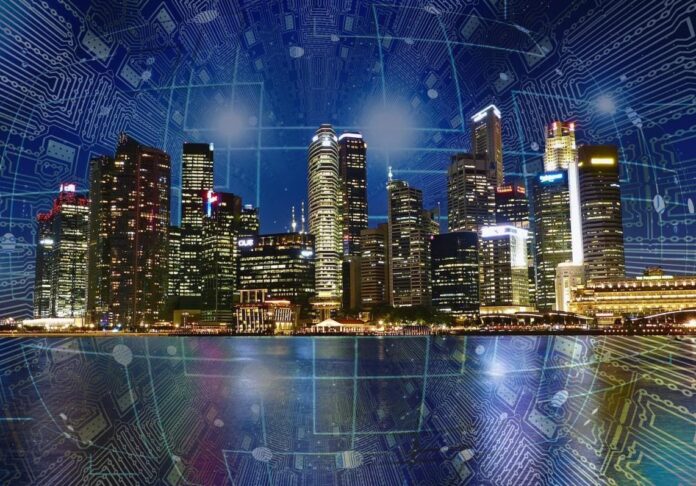 Like Capital smart city, Lahore smart city is the second initiative of a Habib Rafiq Pvt. Limited and including its partners. After Capital Smart City, it is the second beautiful and luxury city. It is a residential project as a well commercial project. The Lahore smart city is considered one of the prominent smart cities in Pakistan. In very early, its development has been started. Surely, this will be the most environmentally friendly city in Pakistan.

This smart city shall be developed on international standards by FDHL & HRL in collaboration with Surbana Jourang. All required land of Lahore Smart City has been purchased. It is very necessary here to mention that the Lahore Development Authority approves Lahore’s smart city.

The primary goal of a Lahore Smart city is to create an urban environment that yields a well quality life as well as to create job opportunities. All announced service delivery shall be provided on time.

Lahore Smart City is located near Lahore. It is the capital of Punjab and the second-largest city of Pakistan. Lahore is one of the beautiful and amazing cities in Pakistan. Due to a well-reputed developing record in Pakistan, Lahore smart city administration has a well-working prelateship with the government -including its bureaucracy and other regulations.

It is said that location plays a vital role in any residence. There is very compulsory to know the pros and cons of someone who invest. It is proudly we say that it is connected to all major roads to Lahore’s main areas. Lahore smart city is all set to launch maps and locations. 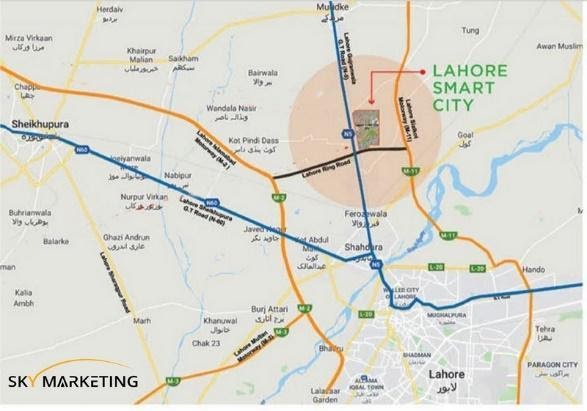 All necessary information has been sent to relevant authorities for approval. It is located near Lahore bypass. It is estimated that it shall be developed on more than 20000 Canals. It has two major blocks. One is the Executive bock, and the second is the overseas block. Both block sizes are 5 Marla residential plots and 10 Marla residential and 1 Kanal. It is a big opportunity for investors and for those who want to build their houses for residence. Because it’s pre-launch plans, have been shared on Lahore smart city website. As soon, It is estimated that this project will be the biggest success project in Pakistan likewise, Bahria Town, DHA, and Blue world city

How to Book your plot in Lahore Smart City:

Lahore smart city administration has provided easy and smart plans for booking via Sky Marketing. You can call on the given contact number and visit the smart city. For booking, there is only required the CNIC and two recent passport size photographs.

After this, the relevant person will give you a booking form and shall help you in filling the process. After the down payment, your plot shall be booked.

If we talk about Lahore city management, it is really friendly and cooperative. The customer praises when they visit, discuss, and finalized their plans with LSC relevant team. Additionally, the Lahore Smart city authorities have said that they will protect and monitor the project and shall deliver before time.

The Lahore smart city shall provide and maintain the following given characteristics for smartness;

It is widely accepted that a smart city is a structure, mainly composed of (ICT), to develop, organize, and indorse maintainable development practices to cope with the rising development challenges.

The Lahore Smart city administration has initiated that they will monitor and address environmental concerns such as climate change and air pollution. Waste management and sanitation shall be connected with smart technology. Additionally, they shall guarantee the clean and filtered drinking water shall be provided and shall be maintained. Before per launch of the administration, it is noted that foreigners and Pakistanis are taking interest to invest and live with dignity in the Lahore Smart City. 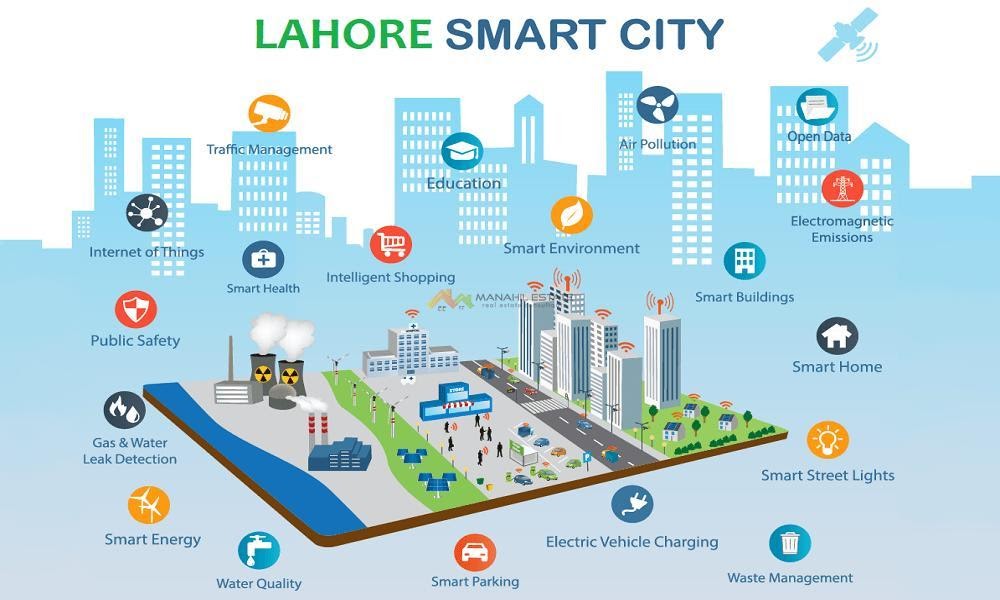 Smart city technologies shall be used to improve public safety, to monitor the crime areas, and shall provide help during an emergency with digital sensors. Smart sensors can be used during the critical situation and emergency response, for example, heavy rains, floods, landslides, etc.

It is expected that the Lahore smart city planned the smart buildings. All smart buildings shall be connected with sensors for not only safety but also to provide real-time space management and to monitor the structural health of the building. Also, the sensors shall be installed for water management to detect leaks in water mains and pipes. It shall work immediately to cope with such incidents. The smart application system shall be made for the public to report any incident.

The Lahore Smart city authorities have set to initiate different sensor types of electrical devices to collect data. These data shall also be useful for the people security, manage assets, to provide service, and to improve the operations across the city. The internet shall be provided in the city to interact directly with the community and city infrastructure to monitor what is happening in the smart city and how to improve the system. ICT shall be used to ensure quality and performance.

Education in the Amish Community

7 Ways to Refresh Your Home Meaningfully

How to Make Your Kitchen Look Even Bigger

6 Ways to Keep Your Air Conditioner in Tiptop Shape

Main Factors To Consider When Choosing A Bed

Hiring a Real Estate Agent vs For Sale by Owner: Which...

9 Must Have Power Tools for Your DIY Home Renovation Projects