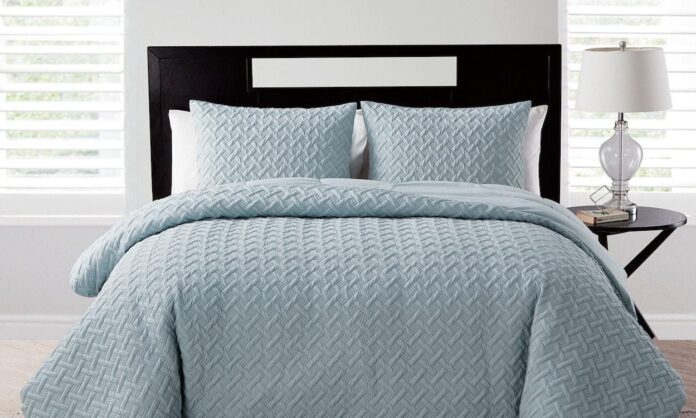 The fall is quickly approaching, which may mean you’re ready to swap out your bedding.

The comforter you choose is a foundational part of your bedding. It plays a big role in how well you sleep at night, and also the look of your bed.

According to Best Sleep Health, down alternative comforters can be stuffed with a variety of fillings.

One of the big pros of a down alternative comforter compared to a down version is the price. Real down comforters can cost hundreds of dollars.

A down comforter is also more challenging to clean, and you often have to get them dry cleaned. If you use a washing machine to clean a down comforter, it destroys its fluffiness.

If anyone in your family has allergies, a down alternative may be your only option.

There are possible cons of down alternatives to be aware of. For example, a down alternative comforter is going to have to be replaced more often than a down one because the synthetic fibers are inevitably going to break down over time.

The following are some things to keep in mind if you’re choosing one.

When you think of a traditional down comforter, you probably instantly think of a heavy, warm, substantial product. If that’s what you want with a down alternative, look for one that’s described as heavy-weight.

If you want something more breathable or a bit cooler, then you can go with a medium-weight down alternative. 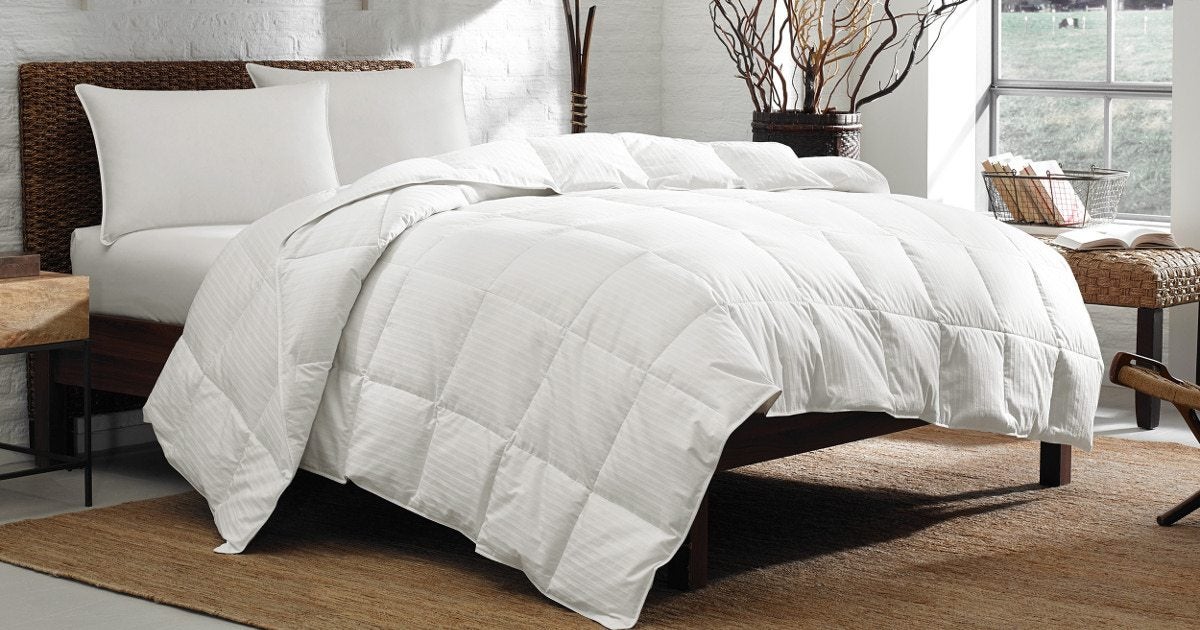 There’s a term called fill power to be aware of. Fill power indicates better insulation, and it’s usually used to describe down comforters, but may also be used for down alternatives.

If you’re going with a down alternative, there are three main types of fills you may see.

There’s synthetic polyester fiber, which can include a variety of hypoallergenic materials.

There’s also gel fiber, which is actually made from polyester gel fibers.

Gel fiber is lightweight and feels very similar to natural down.

Then, there’s natural fill, such as silk, bamboo, and buckwheat.

You’ll also have to choose the fabric of the comforter itself.

There’s Batiste, which is cotton or cotton-blend that’s lightweight and gentle on the skin.

There’s sateen, which is a fabric with a low luster, and it’s usually made of cotton.

Damask is a glossy fabric, and then there’s cambric. Cambric is lightweight linen.

Thread count is a term referencing the number of threads that are woven into a square inch. The finer the thread, the lighter-weight and smoother the fabric will be.

A quality comforter will typically have a thread count of at least 260. Luxury comforters will likely have much higher thread counts.

How Easy Will It Be to Care For?

As was touched on, of the big reasons you might opt for a down alternative as opposed to a real down comforter is the fact that you want something easy to clean and maintain, which isn’t the case with real down.

However, make sure that whatever you choose in terms of a down alternative will be as easy to take care of as you think.

Look for comforters that are machine washable, and hopefully dryable as well. 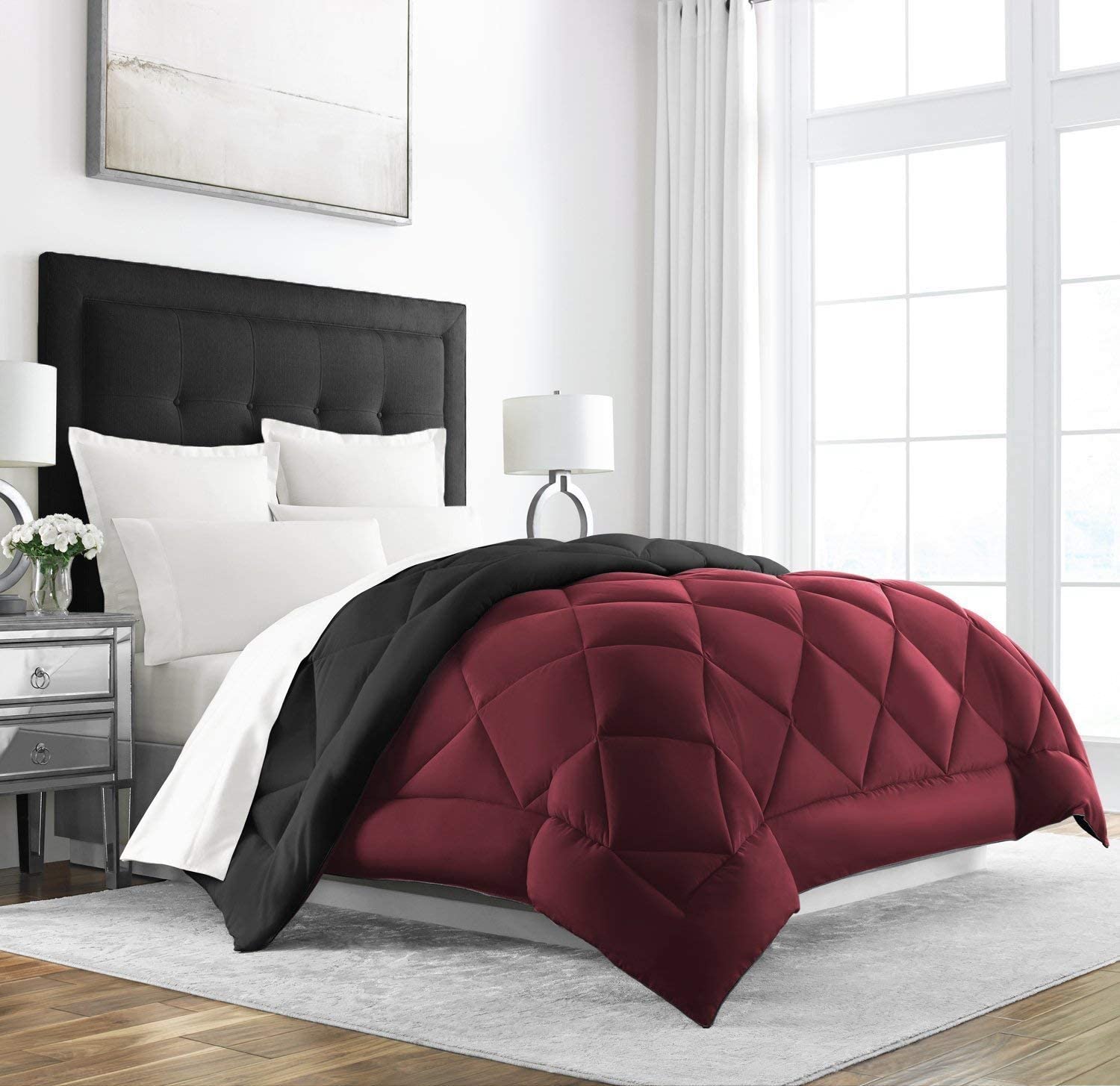 If you buy a down comforter instead, you’ll only clean it every two to three years. This means that you’ll need to have a duvet or comforter cover to protect it.

With a down comforter, you’ll want to shake it out once a week to make sure the “fluff’ is evenly distributed, but depending on the fill, you might do the same with a down alternative.

While we often consider true down comforters to be a luxurious option, that doesn’t mean they’re right for you. If you want something easy to maintain and can be cleaned, is cost-effective, and is hypoallergenic you might instead consider a down alternative.

Down alternative comforters can be filled with different materials and are available in a range of prices, so you can find an option that works well for your needs.

5 Reasons Why You Should Clean Your Commercial HVAC System Regularly

Everything You Need to Know About Self Build Mortgages

6 Essentials To Consider For Your Electrical Business

Is it Possible To Clean Up The Water Damage On My...

How to Build A Cork Board Frame For Window